Cody is an 18 year-old QH gelding whose owner has abandoned him where I board. She only ever visited him twice a year, so it is hard to say if his cribbing is a… neglect-induced addiction or due to gastric issues. He is sweet, gentle, and loves getting attention. His hooves have cracks that would need shoes to grow out. He is quiet, keeps to himself, bottom of the pecking order but prefers being with at least one other horse. I would take him if I had my own facility but cannot afford board for a second horse. Please email Kim at b.e.c.2009@live.com for more info or if you can give him a forever home. No meat/kill buyers. I would rather pay to give him a gentle, humane end surrounded by his herd in dignity and love than see him go to slaughter if no home can be found. Located near Milton, ON.
I left the contact information in on the slight chance someone who reads this here has a spot for this old fellow.  Can’t hurt…
Have to give every respect to this woman trying to find him a loving home, and if that fails willing to give him a dignified loving end to his life.  This old fellow really tugged at my heart today, and made me wish I had land as he is not too far from me.  But I don’t, so I’ll share him here and hope for him.
Abandoned at a boarding facility usually means after a period of time the horse is sold to recoup the board owing, some barn owners care where to and some do not.  In the mean time this fellow is at least being fed and given the minimum of care.
I have, in the past, read of situations where the abandoned horse is not even fed.  Not only is that illegal but it is completely immoral, how can anyone hay the rest of the herd and leave one guy out because his owner doesn’t pay up or care?  Mind boggling!  And swift-kick worthy!!!!
Boarding barns are a business, any unpaid board, feed or care given to a deadbeat’s horse should be able to be written off as a loss, yes?  So if all one cares about is money-there’s that sorted out.  And if one truly loves horses the money isn’t that important, if saving a bit of feed means starving a horse.
Even scarier (as a teen I saw this) is the horse abandoned at a self-care barn.  For those who have not kept a horse at a place like that how it works is YOU come out and feed, YOU clean the stall, YOU turn your horse out and bring him in.  Not a bad deal if you are close as the price goes down drastically, and usually if you are going away or ill you can make a deal with another boarder to do your chores.  One day you return the favor.  That is in ideal world, however.
My friend had her grade palomino in a such a place.  Most of the boarders consisted of young women and teens.  Of course they were at the barn every day, rain, shine or tornado warning LOL.
One horse was not so lucky.  In all my visits there I never saw his owner, so the big fugly albino stood in his stall day after day.  My friend told me he was a big older man who scared her (we were teens-which may have meant he was all of 30!).  If it was up to the owner he wouldn’t have even had fresh water or a flake of hay thrown in.
Lucky for the albino he was surrounded by horse-crazy girls who felt very sorry for him.  Feed was included at this barn so all took turns haying him, making sure he had fresh water, and mucking his stall.  Turnout for him was sporadic but better than what his owner was doing.  Apparently this man had threatened the other boarders that he didn’t want anyone touching his horse.  Just the idea of this big mean man showing up as someone handled his horse had the whole barn scared, so he must have made some impression.
Where was barn management, you may be wondering at this point.  Well…they were busy doing anything but managing the place-to stay out of a long story lets just say they didn’t give a shit and leave it at that.
So Casper (as I called him) was lucky-no one minded taking a few minutes to at least make sure he didn’t starve or dehydrate or be buried in his own poop.  His life could have been a LOT better but it could have been a LOT worse….I have no clue why someone would own a horse and do that, except to just want to tell people “I own a big white horse” to impress people.
I doubt he would ever be confused with a Knight in a white horse….. 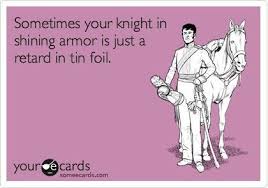 What are your thoughts on abandoned horses at barns?  Do you think the barn owner has any responsibility?  Should a minimum of care be provided?  How long would you wait before considering a horse abandoned?  How much effort would you put into finding the owner (hey for all we know they dropped dead!)?
If I operated a self care barn I would make sure the horses were actually being cared for, even if one does not have a legal responsibility (and I’m not sure one doesn’t-they are on your land) there is an ethical one, isn’t there?
Anyways-fire away, and have a great weekend!  And if you can spare a good thought for Cody or share his info please do 🙂

I'm a happy camper 95% of the time, I love animals and kids....and some adults. I believe in Karma and am a spiritual and moral person. Bad people may gain in this world but they are still bad.... I have many interests, including horses, birds, growing my own food, art, writing, the Runes....yes, it is all over the map. I feel some of us are here to care for those who are not cared for by those who should care for them-if that makes any sense ;-)
View all posts by crow131 →
This entry was posted in Uncategorized and tagged abuse, bad owners, boarding, pet peeves. Bookmark the permalink.

Discussing the good, the bad and the ugly of the horse world.

no boundaries, no filter, no worries.....

Crazy with a Chance of Rain

A place to rant about what is bad in the horse world. Bad owners. Bad sale ads. Bad slaughter industry. Bad bad bad...